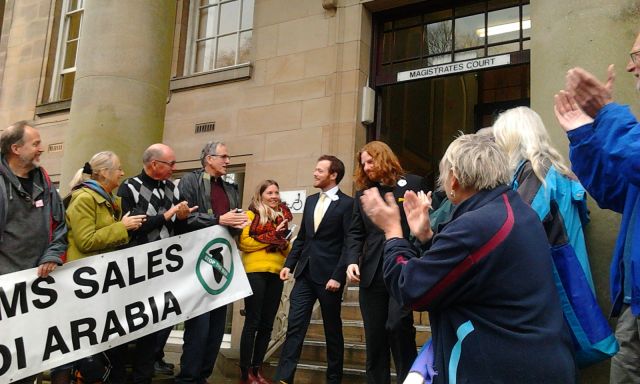 As a Quaker and activist, I have been attending the trial of Sam Walton, a young Quaker from London and Rev. Dan Woodhouse a Methodist Minister from Leeds, who have been charged with criminal damage for breaking into BAE Warton in January 2017. Their intention was to disarm Typhoon jets, for which they had a list of serial numbers which they believed were about to be sent to Saudi Arabia for use in the bombing of civilian population and infrastructure of Yemen. We also heard that BAE Warton also serviced planes from the Saudi airforce and that there was a plane possibly ready to be returned. So in the early morning of January 29, 2017 they entered the base by cutting through two perimeter fences but only made it to a security door before being spotted by BAE security. They fully complied with the requests of the security services and the police who arrested them, as intended by the pair should that be the outcome.

This coincidentally was 21 years after the Seeds of Hope East Timor Ploughshares action at the same site when four women disabled a British Aerospace Hawk jet and were acquitted by a jury. I had been living in Middlesex at the time and missed the news on it, so I will catch up on their story by reading Andrea Needham’s book ‘The Hammer Blow’.

Rev. Dan Woodhouse was represented by a barrister from Matrix Chambers, Blinne Ni Ghrálaigh and Sam Walton represented himself. They both gave good accounts of their backgrounds which led them to their actions and we were left in no doubt that they were of good character and that they truly believed that war crimes were taking place in Yemen by the Saudi’s, facilitated by our Government supplying them with the hardware knowingly.

They are both very passionate and sincere people who care very deeply about people and the injustice of the war in Yemen. They have both tried all legal forms of protest and have had no success; such as engaging with their MPs and other organisations like Oxfam, Amnesty International and the UN. They believed that their action was their last opportunity to prevent more lives being lost and property being destroyed. The fact that Yemen now has the largest outbreak of cholera is no surprise after what has been done to their country.

My husband joined me from the second day as the case was so compelling from a faith and moral point of view. So on the third day, we were awaiting the verdict from 10am we found the court was delayed and then resumed after 1.30pm. District Judge James Clarke gave a carefully considered judgement as he found this to be a unique case of importance (see the press release below). The elation I felt sitting there when the ‘not guilty’ verdict was given, after two days of listening to these eloquent and impressive young men, (as described by the judge) was tremendous I’m sure, for all of us.

Video before start of Sam and Woody’s trial

This afternoon, Reverend Daniel Woodhouse and Sam Walton, a Quaker activist from London, were found not guilty at Burnley Magistrates Court, following their arrest for trying to disarm Typhoon fighter jets at BAE Systems’ site in Warton, Lancashire on 29 January 2017.

Their aim had been to stop the jets, which had Saudi markings painted on them, from going to Saudi Arabia where they would be used to support the ongoing bombing of Yemen. Sam and Daniel successfully argued that their intention was to save innocent lives and prevent war crimes, by physically disabling the warplanes.

The two campaigners broke in via a fence on the perimeter of the site, and got within five feet of the warplanes before being stopped by BAE security.

The court heard evidence about the scale of the brutal bombardment, and the many serious accusations of war crimes that have been made against the Royal Saudi Air Force.

In delivering comments on his judgement District Judge James Clarke said: “They were impressive and eloquent men who held strong views about what they were doing and what they wanted to achieve. They impressed me as being natural in their delivery and honest throughout their evidence…”

“However, having considered in full the defence under sec 5 Criminal Damage Act 1971, I find the defendants not guilty.”

Since the bombing of Yemen began in March 2015, the UK has licensed £3.8 billion worth of arms to Saudi Arabia, including:

In a joint statement, Sam and Daniel said: “We did not want to take this action, but were compelled to do so in order to stop the UK government’s complicity in the destruction of Yemen. Thousands of people have been killed in the brutal bombardment, while companies like BAE Systems have profited every step of the way.

This vindication from the Courts is further evidence of the hypocrisy and moral bankruptcy that underpins so much of UK foreign policy. It is time for the government to stop putting arms company profits ahead of human rights. We do not regret taking action, and would do it again in a heartbeat. The only thing we regret is that we were not able to finish the job.”

Wet day in Keswick
Looking towards Blencathra
On Little Dodd
Descent by Dodds Wood
Enjoying fell walking in the Lakes near Keswick.
Descending from Carl Side with Derwent Water behind.
Loading Comments...
%d bloggers like this: